It's hard to believe that it's been over 20 years since purchasing my fist KMG grinder. Well, yesterday, a new addition entered the family. The new KMG TX!! What a machine! 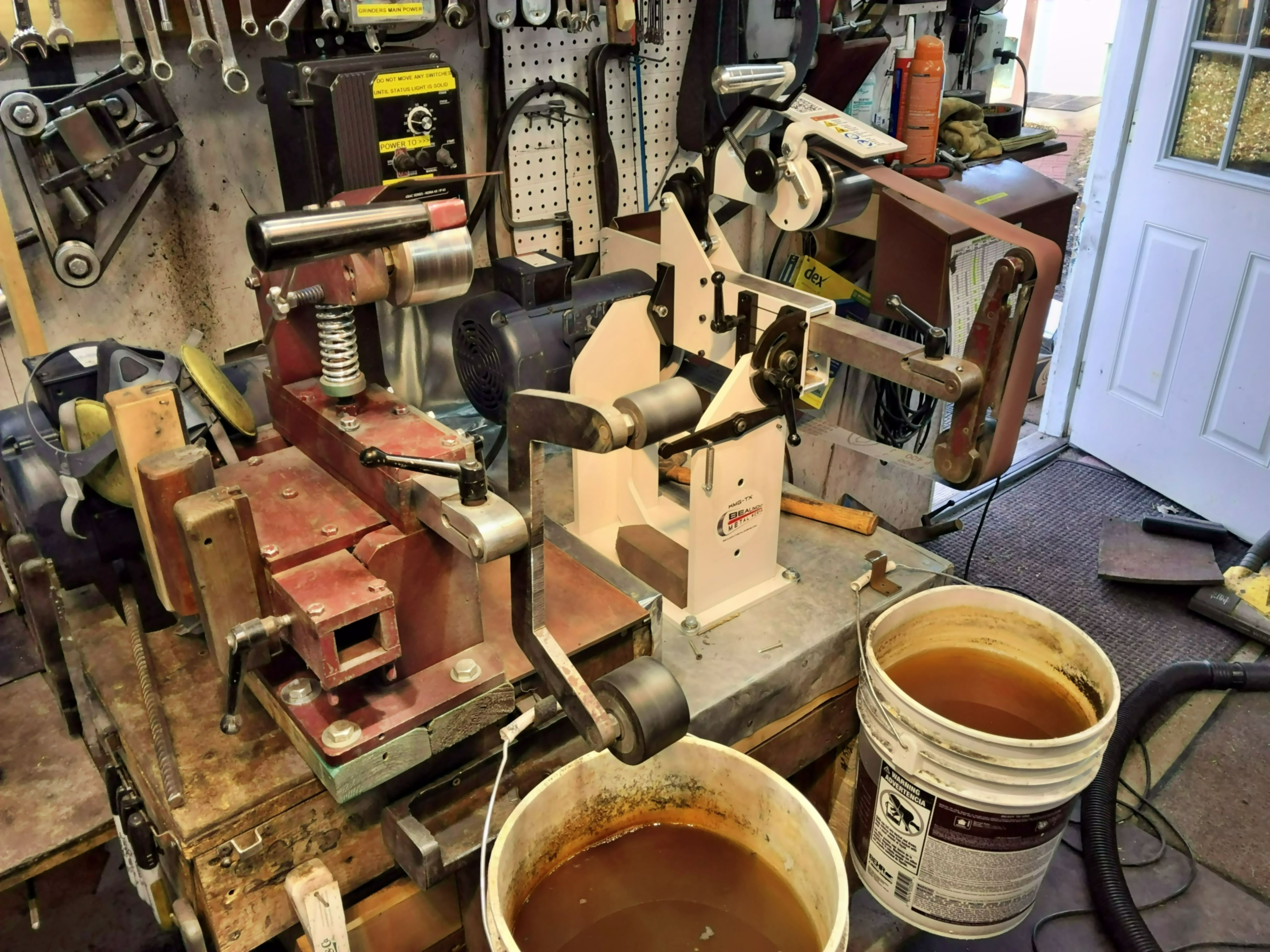 On the left is my heavily modified original KMG grinder. I've done a number of modifications, including changing it to a direct drive a couple of years ago. On the right (the white machine) is the new KMG TX machine. It's pretty much EVERYTHING that anybody could want in a knife grinder. Dual receivers for attachments, ratchet belt tension, Horizontal and vertical tilt, SUPER good tracking, and most important, and indicative of KMG machines.....a super heavy duty build quality. Now to go make some grinding dust....and get to know my new friend. More to come!!

Lucky! I've been eyeballing these

They came out with the new model a lil after I got mine sad!

Well, maybe a little sad, but if you got yourself a KMG of any variety, you've got a great machine that with minimal maintenance, with last you a lifetime!

Recently, I'd read some posts on various forums about how KMG's Customer service "is terrible", or "their support sucks!" but none ever elaborated as to why....even when I sent PMs asking. After doing some investigating, I found just what I thought I would..... people who didn't/don't have enough common sense to even own a grinder, much less install and use one! One case involved a "gentleman" who was ticked off that the folks at Beaumont/KMG would not "coach" him through installing a 220v circuit in his garage, and they told him he needed to hire and electrician. Another instance was someone who had ordered the wrong items, even though the folks at Beaumount/KMG had double and triple checked that he indeed wanted those specific items....then the individual was ticked off when he learned for himself that the parts he order did not work together.

And on and on..... after looking into no less then 10 instances of people ranting about how bad customer service/support of Beaumont/KMG is, I found that in ALL cases it just wasn't the truth! It was people who were/are pointing the finger at others for mistakes they made, and in most cases it was simply unreasonable requests, such as the wiring a 220v circuits I mentioned above.

The original KMG is still without rival, the best grinder for the money on the market, and the new TX model contains touches and thoughtful aspects that make it stand head and shoulders above ANY other premium grinder. Long story short, you can't go wrong with any KMG grinder, and no matter what you've heard or read, the folks at Beaumont/KMG provide the best customer service and support that I have ever experienced. Without naming specific names, try calling or emailing ANY of the other "top end" grinder companies, and see what you get...... either a "we don't do that" or get completely ignored. In addition, anybody who buys one of the "johnny come lately" company's grinders is setting themselves up for failure.... I've been at this a LONG time, and seen it before...... those companies are only here to cash in on the current popularity of knifemaking...and as soon as it dies down, they will be gone, along with a lot of folks' money, and no support for the machines they sold.
Last edited: Nov 15, 2019

Staff member
I have had a business relationship with Rob and Beaumont Metalworks for over 10 years. My experience has been great and I have seen their customer service personally several times.

Ed, did you get the articulating work rest with your new rig?

Ed, did you get the articulating work rest with your new rig?
Click to expand...

Yep! I'm waiting on it. Spoke with Halle a couple days ago..... they are waiting on parts to complete mine and get it sent out.

I gotta admit, I get a bit ruffled when I hear or read of anything eluding to bad support or customer service from Rob and company. In my experience he has always been right at the top (same can be said of you and USA Knifemaker).

I think I've told the story before, but when I got my first KMG, I had saved for a LONG time, and had my heart set on a Bader BIII. The ONLY change I wanted was on the flat platen.... I wanted the solid aluminum wheels replaced with 1 1/2" contact wheel at top, and 3" at bottom. I called Bader, all set to order, and lay down my money. When I asked for the wheel change, I got "If it's not on the shelf, we won't do it." After several tires, I told the person I was sitting with money in hand, ready to spend it with them, if they would just do what I asked....again... "If it's not on the shelf......". I hung up, heartbroken. Next day I learned of Rob and the KMG...so I called him. He agreed to build a entire "special" platen for the KMG to my specs.......and had me a KMG grinder sitting in my shop in less then a week! Over the years since, I have tested various attachments for him, given advice for KMG upgrades, and have enjoyed top notch support/service. So, having had the best experiences with Beaumont/KMG for 20+ years.....and then reading or hearing folks bad mouthing them...... It's generally someone with an "entitled" attitude, who likely has no business being anywhere near any type of machine, much less owning/try to operate one.

I know in today's knifemaking businesses, education is a big part of it....but I find myself again and again amazed at just how dumbed down people have become, and how they expect everybody else to solve their problems for them. God Bless the folks that can do that day in and day out..... at my point in life, I've become acutely aware that "You Can't Fix Stupid"....and I no longer try.

It looks like a new mustang sitting next to it's classic in the driveway. I'd be interested to see your review.

That's a beautiful machine.
I have the question tho about your older one. What mods have you done to it? And did you find plans for them or did you just kinda mod it out yourself??

All the modifications made to the original KMG machine were/are of my own making. I added a second tooling arm receiver, created a different/new style of tooling arm to simplify changing attachments (We'll be doing a video for KMT on hot to build the tooling arm in the near future), I also added extra length to the idler arm, to make it easier to compress, trimmed the bass to allow use of an extra long flat platen (which I fabricated, and change it from belt drive to direct drive.

I've only had a couple of weeks to use the new TX machine....but just keep being amazed at how thoughtfully it was designed, and it's capabilities. Tim and I just finished up filming a review video of the TX.....it should be on KnifeMakerTraining.com within a few days..... I'll also post it on the forum here on KD.
You must log in or register to reply here.
Share:
Facebook Twitter Reddit Pinterest Tumblr WhatsApp Email Link
Top