Can't really find 416 ss in the dimensions I want for a reasonable price. So, I picked up this 1.5" bar pretty cheap online, guess I'll try forging what I want. Any of you guys have experience doing this? How hot do I work it? Does it air harden quickly while you're working it? Annealed? Hardened? Going to be used for guards. 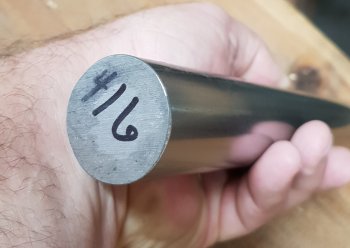 I've been forging round 416 into guard stock for a few years now. (for the same reason) I find it easy to forge at typical forging temps. It does seem to scale significantly more then typical carbon/alloy steels.

Where the glitch came for me was annealing it. At first I tried annealing as I would typical knife steel....in vermiculite....no joy. Inconsistent at best, with hard and soft spots, and in many cases I could not drill or file it, and it some cases the vermiculite simply had no annealing effect on it.

I consulted some folks, asking for advice, and got various answers on annealing. The one that worked for me was after forging it to the size I wanted (and leaving a bit extra for scale removal) using a heat treat oven, soaking at 1350F for two hours, and forcing it to SLOW cool in the oven. (I placed several pieces of 1 1/2" X 3/4" A36 around it in the heat treat oven to force a slower cooling......and the slower I could force it to cool, the better the annealing results, and the more consistent it was/is to work/finish into guards.
Last edited: Sep 23, 2018

[QUOTE="EdCaffreyMS......and the slower I could force it to cool, the better the annealing results, and the more consistent it was/is to work/finish into guards.[/QUOTE]
Hey Ed, do you leave it in the annealed state on the knife? I was wondering if that would affect its durability and corrosion resistance. I've got a program in my Evenheat just for annealing that I've used on SS blade steel, that's no problem. I was thinking about pinning a guard, like a loveless style, so guessing that would have to stay annealed?

Personally, I think heat treating 416 guards/bolsters is kind of a waste. It only slightly increases the stain resistance, but makes everything else more difficult. And the most important part.....if you heat treat a 416 guard or bolsters, then install it with annealed 416 pins, the pins will show every time.

Not sure what your program for annealing SS blade steel is, but don't run the 416 past 1350F, and don't hold it longer then 2 hours for annealing. It's requirements are different then the blade steels.