We all know a ceramic belt in 36, 50, 60, or 80 grit works really good, but does need speeds in excess of 4,000 SFPM to really shine. I've always read it takes high speed and heavy pressure to make the ceramic on the belt stay sharp for good cutting. My question is about 120 grit ceramic belts, or even 220 or 400 grit ceramic belts. Are these worth the money vs an AO, or Zirconia/AO belt down at the speeds and pressure normally used for these higher grits?

I use 120 and 400 ceramics and they seem to work fine at lower speeds. To me they are definitely worth the money vs AO belts. I tried some Zirc belts when I first started but wasn't impressed with them. Now that I have a little more experience I might give them another try.

Randy Lucius said:
I use 120 and 400 ceramics and they seem to work fine at lower speeds. To me they are definitely worth the money vs AO belts. I tried some Zirc belts when I first started but wasn't impressed with them. Now that I have a little more experience I might give them another try.
Click to expand...

Same here. They may work best at high speeds, but they work just fine at any speed. I suspect the "high speed / high pressure" aspect is more important in a production facility where increasing belt life by 10% adds up to tens of thousands of dollars over the course of a year. In a non-machine application (meaning us guys holding a blade against the belt with our hands) I think it's largely irrelevent. We'll never come close to getting the maximum designed performance out of a belt.

Which ceramic belts do you use in the grits above 120?
Where do you order them from?
A

the requirement for more pressure and speed goes up as you go lower in grit i find... i literally can't apply enough pressure to make full ceramic 36 grit work well on hardened high wear steel... so i use 60 and 80 grit at a fairly low speed, with as much pressure as i can find. then i clean the belt with a latex block often, and i use a diamond masonry wheel to expose grit if needed...

Owl said:
Which ceramic belts do you use in the grits above 120?
Where do you order them from?
Click to expand...

I've ordered 400 grit ceramic belts from here Red Label Abrasives and really like them. They have them in 240, and 320 also. On my next order I'll get some of their 240 belts. If 36 grit belts stop cutting I'll run them at high speed for a few seconds and touch them with a diamond grinding wheel dresser. This exposes new grit and then you can slow the belt back down and continue grinding.
Last edited: Jul 2, 2020

My recent switch to VFD has changed everything, so this is limited experience...

Ya'll have given me something to think about on ceramic belts. I've always read ceramic took high speed and high pressure, which fits for low grit (36, 50, 60, etc) but not so much for the higher grits like 320. Perhaps those don't really "need" that much speed 'n pressure to work. Also the idea of using until becoming dull, then grinding against hard steel at high pressure/speed to break/sharpen the grit makes sense.

I'm way late to the party, but I've been watching, and am very interested in what everyone is saying. Personally, I have, and only use ceramics in my "heavy grit" belts (50s and 120s) for the most part.

When it comes to the finer grits in ceramics, I like them on the surface grinder, especially with "X" weight backing. Since this conversation started, I've been to Tru-Grit's site a few times, researching various ceramic belts. And based on what I'm seeing, the major belt makers/companies offer few belts in ceramic, once you get to 400 or finer, which leads me to believe that there's a reason....but exactly what that reason is, I don't know....at least yet. Next time I speak with Scott on the phone, I'm gona get his input and will let everyone know.

Tru-Grit has their site set up really well, and it makes it super easy to research various belts.....it's a bit slow, but then again it's dealing with literally thousands of belts. I might buy some belts elsewhere, but I always use their site for researching belts.
K

Ed: Thanks for the comments. It sounds like your thinking is much as I was thinking on ceramics. I've not used an 120 ceramics, but do use the 50/60 grit belts. 36 grit is always AO for removing lots of wood on handles. When you're using 120 grit ceramic belt, what speed (SPFM) to you use? I tend to think of speed as SFPM since I've got my VFD drive set to read out in SFPM rather than RPM.

I agree, TruGrit does have a good layout for researching belts, but sorta on the slow side sometimes.

I do almost the same. I start with a 60 grit ceramic running wide open. Then I go to a 120 grit at about 75% and slow it down progressively as I near my finished dimensions.

I don’t use much pressure at all. Pressure is almost always how I ruin a good thing. In fact, I know it’s time to change the belt when I realize I’m pushing to make the belt cut. Excessive heat is usually what gets my attention.

John Wilson said:
I do almost the same. I start with a 60 grit ceramic running wide open. Then I go to a 120 grit at about 75% and slow it down progressively as I near my finished dimensions.

I don’t use much pressure at all. Pressure is almost always how I ruin a good thing. In fact, I know it’s time to change the belt when I realize I’m pushing to make the belt cut. Excessive heat is usually what gets my attention.
Click to expand...

Yup. That's the biggest change for me that I wasn't expecting. Running the ceramics fast cut stupid good without much heat at all. When it starts getting warmer, swap belts.

I haven't tried the "freshening up" by cranking up the speed and bearing down on it.

I've got a couple more thoughts on the issue of fine belts. I don't see the need for a ceramic above 120 grit. I'm assuming that the goal is to get longer life out of the finer belts. If you haven't tried Norax or Trizacts, you should. I move from 120 grit to an A100 Norax. I do just like described here at the bottom of the page. 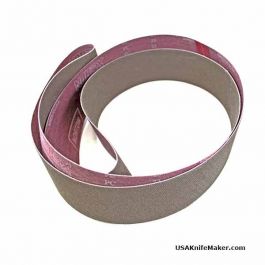 Norax Engineered Abrasive These belts wear like iron. I use Norax belts on every knife I make. I take my knives up to 120x grit and then switch to Norax for the finish. I use 100x, 65x, 45x, 16x and finish with 5x for a full mirror. A minute or two on the buffer using green chrome and I have a...

I agree......norax and trizacts are the way to go........they last way longer......i always use norton blaze orange up to 120 grit......when they start to get dull grindng bevels i use them to grind profiles using pressure to refracture the ceramic and get a lot more use out of them

Great and timely question, Ken. I've been wondering this lately too (thanks for the lack of income from the pandemic), and noticed just yesterday that my 220 and 440 AO belts (moderate speed and not very heavy pressure) seemed to work a lot better than my ceramics on my latest post HT blade. What I concluded (and I may be wrong due to the very small sample size) was that the high speed and pressure tended to load up the 220/400 ceramic belts with grit making them ineffective pretty quickly.

I forgot who told me this (Ed or John Doyle) but when I get to 220 grit I slow my grinder to small wheel speeds. It makes the A/O belts last much longer. I have pretty much decided to stick with the Sankyos from the new POP's people. At $2 a belt I am happy. 60-120-220 I like me some Cubitron II's
You must log in or register to reply here.
Share:
Facebook Twitter Reddit Pinterest Tumblr WhatsApp Email Link
Top