Forge vent inside? Any running in enclosed space? CO levels?

Staff member
I've always run my forge outside or in the garage with the door open. I am working on a plan to set up an inside forge set up inside our new location (next fall) and spank hot metal a little more often...

my concern is carbon monoxide buildup with an enclosed, inside setup. What is anyone using for ventilation? I am thinking I'll need to install a low hood with a vent fan but I'd like to hear about anyone's experience on this.


Any any all advice, insights, experiences on this would be appreciated.
thanks
t

i'd love to hear some knowledgable input on this as well. i hope to be embarking on a similar endeavor, but much sooner. if it helps, my space is fairly small: about 400 square feet, but with a high ceiling.

I've install a monitor and have the vent ready for an exhaust system in my new shop. Got a foot injury which has kept me out of the shop for the last 7 months. Thus have not completed the install. 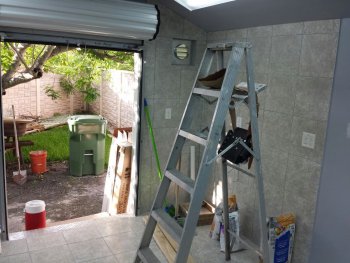 You can see the vent hole in the wall next to the over head door. In South Florida the system would allow me to forge during the rainy season. My shop is only 200 sf.

Good thought Tracy! I honestly can't think of anything that produces as much Carbon monoxide as a forge. I have gable fans at each end of my hot shop. When the forge is running, at least one is ALWAYS running. Even when its below zero outside, I have the one nearest the forge running, with a window open on the opposite end of the building.

I have a hood over the table that holds my forges....with a 10" piece going outside....I tried for a number of years to find something to "power" that vent, but I'm yet to find anything that will not burn out within a couple of hours...so its just "free flow". In this pic, you can see that the forge hood hangs from the ceiling, and in the upper right is the gable fan.... I also have two large ceiling fans in the hot shop.... and find that they help greatly.

I have a hood vented forge, if I run it with the door and windows closed the CO level skyrockets......VERY BAD! I can run with 2 open window and a fan exhaust without CO issues but the place gets cooking in less than 30 minutes. Open the door and the temp drops significantly, so to answer your question, gotta have a lot of fresh air moving thru.

I don't have a hood over my forge but I do have a squirrel cage above it. The heat rises and get drawn out with that but also I have an old swamp cooler without water that I use to move fresh air from the room next door. I play musical doors depending if I'm grinding or forging. I can forge in the summer this way. Like Ed I have a hood but unlike Ed I haven't installed it yet. My grinding room has an attic that collects allot of the heat but I've installed another fan that is thermostatically controlled. All that extra heat can cause dry rot. That fan comes on in the summer whether I'm forging or not.
S

I have a 10" heat and air duct hooked to an old cast iron hood. I installed a draft inducer in the duct and it is variable speed, with the draft inducer running on high the hood is like a vacuum cleaner. I f you search the net, you will find a draft inducer. It is a squrril cage fan that runs parallel to the pipe. I can use it for coal or propane.
Steve Hansen

Staff member
I'll look at one of those draft inducers. Once we get into the new place and settled, I'll work on fabbing up a large hood and hanging it off a back wall with a fan venting outside. It will be positioned by a small roll up door so I can crack that for additional ventilation. I'll also put in several CO monitors so we don't get anyone sick.

This is one of those subjects that needs to be taken seriously.Detectors at different levels as carbon monoxide is not heavier or lighter than air.I always work with two doors open.We have a lot of deaths in Alaska due to folks trying to stay warm or having there furnace venting geting clogged.Scary stuff when a entire family parishes in the night.

AkWildman said:
This is one of those subjects that needs to be taken seriously.Detectors at different levels as carbon monoxide is not heavier or lighter than air.I always work with two doors open.We have a lot of deaths in Alaska due to folks trying to stay warm or having there furnace venting geting clogged.Scary stuff when a entire family parishes in the night.
Click to expand...

I agree. CO poisoning is serious stuff and that is why I want to know as much as I can going into it.

Tracy I think if I had a forge in a enclosed space and used a ventalation system of any sort I would have a daily ventalation system check with a actual log book.Even a twice daily check,making sure it is working properly and no obstructions.

Bossbog,
I don't forge but this sounds dangerous as all get out!

Do you have any pals with state or county safety/fire departments that could stop by "Unofficially of course" and you can tell em what you want to do and they could advise you?

I know you don't want anyone getting hurt but you also are possibly opening yourself up to fines and lawsuits with building this kind of stuff inside?

I don't forge but I've worked for a natural gas utility for almost twenty years. I ran the leak truck for about 16 years and every year it seems there would be at least one death from CO in our system, usually people heating their homes using the stove. I've never been affected by CO but fell out once on a natural leak and had six linemen pull me out of the hole. I got a little light headed like a lot of leaks I worked but that time I went out like a light and when I came to it was like waking from a dream, CO is different, it usually starts with a headache right between your eyes and flu like symptoms,
soon your out like a light, and if no one is around you don't wake up.
Ed's set up looks good but the gable fans may actually create a negative draft pulling the CO out of the flue. I've seen induced draft blowers on commercial furnaces but I'm sure their pricy.
If I had Ed's set up I would feel pretty comfortable with it as long as a couple windows were open when it was running. I'd also have two CO alarms. one for redundancy. and remember - the headache will usually come first. I wouldn't have the fire dept. come over to look things over, their liable to say something to the code dept. and open a can of worms. on the other hand, a couple of local gas workers would probably be happy to come over and run their CO detectors while the forge is running to get an idea how safe you are, and not cause any problems, that's what I would have done when I was on the leak truck, make people feel safe while promoting using gas. it's like a lot of other things, handle it wrong and it can kill you.
And in closing I'll say this...CO is a real ugly way to go out. be careful.
Last edited: Apr 17, 2015

I started with a small hood hanging over the forge, it never worked well so I kept adding to it until it basicly enclosed the forge. Not only does it work very well at drafting out CO and borax fumes it really helps with the radiant heat coming off the forge. My new hood will be built in a similar fashion but large enough to enclose 4+ forges and the sides will drop to the floor so fans won't interferer with the draft. I have a CO monitor that starts warning you at 30ppm at eye level near the forge, and at least one door open.

I got a large furnace blower at the recycle place for 20 bucks.
Cut a hole in the upper shop wall and draw fresh air across the forge area from the front of the shop.
Even when it's -30 here in northern Minnesota, my forge will heat up a 30 X 40 shop in little time to the point where I am just wearing a shirt.
Even extracting the amount of air a furnace blower will move won't cool the shop off in the dead of winter.
20 bucks.
K

Tracy, the furnace blower above my head moves an amazing amount of air across the forge area.
It'll suck the doors open at the other end of my 40 foot shop.
As I mentioned in the previous post - I got it for 20 bucks at the recycle center.

Staff member
Thanks for all the comments guys.

I will build a hood with a huge blower and put up a partition wall if I need to help the air flow. I'll put up several CO detectors as a precaution.

Karl, it looks like you are in Star Wars with a light saber!
K

I don't know if I'd even bother with the detectors.
They'll probably go off at a level that is far from dangerous, and they'll just end up being a nuisance.
May the Force be with you.

If you buy decent CO monitors with a digital display they will display at 30ppm and above; but the alarm won't sound until the concentration is dangerous (around 400ppm). 50 ppm is the OSHA limit for an 8 hour shift so if you stay under that you should be plenty safe. I would suggest looking over an exposure limit chart like the one found here: http://www.hutchinsonutilities.com/pdf/coexposure.pdf