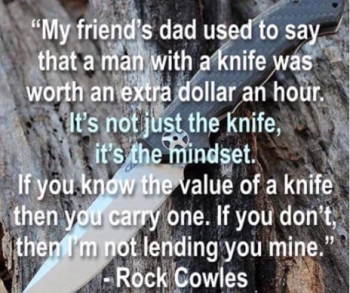 I agree with that!
I air traveled out of state this past week and couldn’t take my knife. I probably reached for it several times by habit. Normally I never leave home without it.

Opaul. Depending on how long you would be gone you could mail it to yourself at your hotel then drop it back in the mail when you leave. Just be sure to let the hotel know you are expecting a package.

I have been carrying a pocket knife since I was eight years old. Back then I was told not to take it too school. However when I wasn't in school or church one was always in my pocket. From the time I got out of HS I have always carried some kind of knife. Back then the Army did not have a problem with me carrying one at all times if I was in fatigues.

If for some reason I take it out of my pocket I am like OP, I reach for it all day long!! When I roll out of bed in the morning, the britches go on and the pocket knife in the pocket. It is just second nature!!

Over the past 25 yrs. I've worn a 4" bladed drop point everyday, sadly, I've never been offered any more money by my employee although I do get the gratification of working with a bunch of other guys in the field and if one of the young guys ask to use my knife I just look at everyone and say.....his mother won't let him carry a knife. and if it's an older guy I say...OH, that's right...your wife won't let you carry a knife. that always goes over real good.

Love it!!! I've always got a knife in my pocket, and no, you can't borrow it.

My dad used to say when someone asked if he had a knife they could borrow, "got my pants on don't I, but it's not a loaner."

As a boy from about 4 years old my grandfather worked in a mattress factory for a few years (after a farming accident) and was in charge of the part where the old clothes were shredded for the stuffing and he was always bringing us pocket knives that had been left in trouser pockets so I always had a variety of small knives to carry. The one I remember in particular was a (faux) ivory handled pen knife with a pair of blades. I made my own folder about 15 years back and it has been my edc since then but it is a bit agricultural so I have taken steps to remedy that later in the year.
Three things always go into my pockets when I put my trousers on. Pocket knife , wallet, truck and shed keys and then I feel correctly dressed.

I feel lost without my knife. I can’t be the only one here who does the “pocket pat” when I head for the door.

Chris Railey said:
Opaul. Depending on how long you would be gone you could mail it to yourself at your hotel then drop it back in the mail when you leave. Just be sure to let the hotel know you are expecting a package.
Click to expand...

I actually thought about that and could have mailed it to the folks we were visiting but didn't get around to it. Turns out I could have used it on several occasions and I also like the security that comes with it.

My grandfather taught me a man always carries a knife. We'd be working with him on the farm and he would ask you for your knife to cut something, even though you knew he had his own. Man, if you didn't have it on you, you'd get that look of disappointment.

Flew from MSP down to Nashville and drove on down to Alabama for a little vacation and to cheer at a fishing tournament two weeks ago. Had to leave the pocket knife at home... really don't realize how much it means to have it along until you don't. Especially when driving a rental pickup truck and surrounded by Good 'ol Boys!

OK, so we all talk about how naked we are without your knife. How did you feel when you lost your first knife that was something you really cared about! My first knife I bought that I was just in love with was a 3 blade trapper pocket knife, similar to this one! 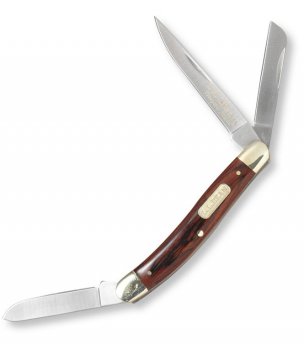 I still remember it like yesterday, I would have been about 12 years old. It was my first year of running a trap line. If bad weather was coming in I would run the line in the morning before I went to school, and then again after school. Bad weather or a front meant a change and the animals fell that before it comes and are much more active.
I ran the line that day and I had several muskrats. I always skint my catch as soon as I came off the line, in the afternoon! That 3 blade trapper was my go to knife! I had one I kept in the skinning shed for dressing in the middle of the field on certain skinning jobs. It was similar to the green river skinner. However a lot of times on small game it was the only one I needed! That was back when any hardware worth it salt had a board full of pocket knives or a least one whole display case full of them!!!
I grabbed my first rat (muskrat) and hung it on the skinning gabriel reached into my pocket, and there was a hole in my pocket. I stood there a second with my finger in the hole. I had on two pairs of pants, so hoping against hope. I shed the outside pair hoping some how it had gotten trapped in between layers. No knife, I stood there in dis-belief, my 3 blade trapper was gone. Every time I ran my line for the next few days, I looked for that knife!! It would have been a miracle to find it as the line was, 3 miles long! After a week I gave it up and went the local hardware to purchase another!!

I always have two knives on me. A Victorinox Swiss Army knife and a 3 1/2" folder. The folder is usually either a Benchmade or Spyderco. I don't think there's anything I can't cut or fix between the two.

On occasion I've ended up with three knives. Still don't loan them out.

Heikki said:
My grandfather taught me a man always carries a knife. We'd be working with him on the farm and he would ask you for your knife to cut something, even though you knew he had his own. Man, if you didn't have it on you, you'd get that look of disappointment.
Click to expand...