Gathering up tools to start making Damascus. 50lb Little Giant found and bought. Now I am in need of a press. Seems to be a shortage of pictures on the Internet. I am interested in the various designs and pros and cons of each. Flow rates, motor hp, and cylinder sizes appreciated. I am not sure which style to build. H frame or C frame. I have no wish to reinvent the wheel. So lets see some pics please

Thanks Ed. Why C frame? I was going to shoot for maybe 30 ton. Is 80 ton hard on your dies? Don't get me wrong I would love to run off with your press. What size of H beam is that? Any other design requirements? I was going to start this project by seeing what I could source for material at a junkyard recycling place about an hour to the south. Might get lucky on a few things. Anybody else wanna help out? Let's see how many presses we can catalog in one spot.
Last edited: Jan 26, 2016

There are a couple of reasons I prefer a "C" frame..... 1st, they are much more compact, with a much smaller footprint then a similar tonnage "H" frame. 2nd, I find it much easier to work in/around a "C" frame. If controls are thought through and setup correctly, you have at least 180 degree area you can work from. With the "H" frame, you could possibly work from 2 directions, but its very impractical considering how "H" frame presses are constructed.

The two most important things I think are a MUST with ANY forging press build......AT LEAST a 6" diameter cylinder, and I honestly believe you cannot "overbuild" a forging press. The cylinder diameter is crucial to keep line pressures within tolerable ranges. I know there are a lot of folks out there who have built forging presses with 5" and even 4" diameter cylinders, but its just plain.....a very bad idea. Most commercially available hydraulic lines are rated at 3000psi burst strength...... the smaller the cylinder diameter, the higher pressure required for a given tonnage. If you've never experienced a hydraulic leak.....even a pin hole in a line under pressure can cut you in half like a light saber!

If you've never built or used a forging press, its impossible to describe the incredible forces you're dealing with. However "heavy duty" you think you need to build it.....DOUBLE IT! I don't say any of that to scare you, just to try to give you some idea of what you're dealing with.

Personally, I do not recommend a press of more then about 24-25 tons for anyone who is not well experienced in using forging presses. "Orange Crush" weighs in a just a tad over 3,000lbs, and put out 80 tons...... and if you don't know/understand what you're doing with it...it WILL hurt you. As to durability, I know eventually its going to require major repair. Watch closely in the video, and you will see the top flexing.....that top is 14" "I" beam, filled in with 1/2" plate, and 1/2" gusset plates on the outsides. The die plates (holders for the dies) are 1" thick, and the press can easily warp those if used incorrectly. I use A36 hot roll for dies, simply because I know I'm gong to be changing them every few months. It does no good to try to use anything else such as a tool or Die steel.....the heat a duration will temper them out quickly, and they will "squash" the same as A36 does.

Many people have asked me if I could only have one, which would I go with....the air hammer or the press...... personally, having used both, I couldn't do without either. I consider the press my "precision", and the air hammer is my "speed". There are so many tasks that I can do on each, that the other either won't do, or does poorly..... both are important parts of what I do, and how I do it.
Last edited: Jan 26, 2016
S

Thanks again Ed. I was recently in Miles City, Montana learning the process of forging damascus. I can see what you mean by press for precision and hammer for speed. I was constantly going from one to the other. That's the reason I wish to build the press. My hammer I was fortunate on in the fact that it is on 10 minute drive from where I'm at. I still need to take a tractor down and pick it up though.
S

I ask just out of curiosity, wether any of you have actually had first person experience of hydraulic press line pinhole leaking?
I have seen building construction hydraulic arm piston lines failing, leaking, and it was just a lot of oil dripping...no laser beams
S

I have seen hydraulic lines a couple of times with pin hole leaks. It was from the security of an enclosed cab tractor. A line on a hay feeder had a small hole in it and would shoot hydraulic fluid 30 feet each time you hit the lever. Not sure what it would do to a person directly in its path. Been my experience that hydraulic lines fail anywhere they contact something. Keep you lines routed away from everything if possible. We usually tape a larger rubber line around the hoses in problem spots. Seems to me the fittings start leaking and need replacement before anything else. We are in the habit of looking for problems before they start.
Last edited: Jan 28, 2016

In most places outside a forging shop, you won't see the "laser beam" leaks. Most of the time they happen just as you folks have described.....slow and "drippy". That's because there is a much better chance that whomever services/replaces/builds hydraulic systems in those cases are compelled to use the proper rated parts, and also the fact that most leaks in "general industry" tend to be abrasion related, or a "clean cut". That's not always the case with "homemade" forging presses/hydraulic systems.

I've seen several leaks as I described earlier in forging shops.... its almost always due to one of two causes.... 1. Improper rated lines for the pressures being generated. In this case I have seen hoses literally "blow" off fittings, causing severe burns from hot fluid, and in two cases where I was present, the pressure of the fluid caused "cuts" on individuals, that required hospitalization.
2. The second, and more common instance of leaks in a forging shop is hot slag, scale or steel coming in contact with the lines, causing failures. This is the situation that most commonly causes the "laser beam" leaks I mentioned...at least the ones I've witnessed. I've seen this several times, and in one instance, the pin hole leaks cut through the plywood wall near the leak..... that's the instance that causes me to write the warnings I give about those "pin hole" leaks. If a leak can cut a piece of plywood, its going to go through flesh pretty easily/quickly.

Of course its not an everyday occurrence (Thank Goodness), but it CAN happen, and in the case of folks building a press, who really don't understand, or take the time to educate themselves, the chances of accidents/incidents are much more likely. Frankly, from some of the homemade forging presses that I've seen, I'm surprised that we haven't seen more cases of serious injury or deaths.
S

Thank you Ed, i will take the subject in much higher consideration from now on...
Eventually i'll build a more serious press than the small air-over-hydraulic i have, when the time will come i'll get only over rated fittings and be very cautios with the routing layout!!!!
S

This might be overkill. Power unit off of a thousand ton coining press. Just kind of followed me home. And I think I found where big hydraulic cylinders go to die. 40 cents a pound for whichever one I choose. Will this work Ed?

Wow! Nice find! Is the power until electric? Gas? Diesel? I didn't have enough electrical power in my shop to run "Orange Crush", so and really glad I snagged the diesel power unit. I like the looks of the cylinder too...... even with having it overhauled/rebuilt, 40 cents a pd is a steal! (as long as it can be rebuilt).

When you're choosing a cylinder, think about the "throw" (amount of travel the ram offers). With that cylinder and power unit, building a frame to handle it will be the most work, and $$$ of the whole thing. I was just sitting here thinking....when I built the last press I did........ I used just shy of 40lbs of 1/4" rod putting the thing together.
S

3phase, 10 hp motor, dual stage pumps, 3000 psi. The frame is my biggest concern right now. Fortunately I have a brother that is a heck of a good welder fabricator. I wouldn't trust my own welds on this project. I didn't get to spend a lot of time at the yard where I found the cylinders but I could see many things the that had potential for being repurposed into a press frame.

Just don't underestimate what you need for a press frame! Over build that thing as much as you can. Probably the biggest problem I've seen when folks build a press frame is that they don't take into consideration the repetitions and the high heat factors...... and things either "warp" badly, or just plain come apart in a short period of time. Even as well built as my current press is...... I had to do some repairs just a couple of weeks ago. So, just overbuild the heck outta the frame, and keep your finger crossed.

Wow! That power unit is gona take a big rotary phase converter to run, that is if you don't have 3phase power already. When I was making the plans to bring "Orange Crush" into my shop, I figured out that it was going to take a minimum of a 15hp electric motor to run it....... and I just didn't have enough power running to the hot shop for the startup amps it would require. Thankfully I was able to scrounge up the funds to buy the power unit that was built for my press (at first I wasn't going to go with the diesel for a number of reason, but it turned out to be the most logical choice)..... its a 4 cyl Kubota Diesel with the pump running directly off the crankshaft/flywheel.
S 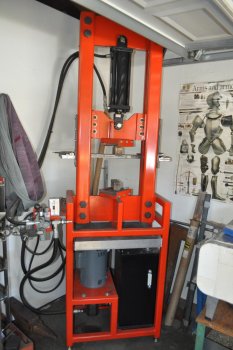 This is my press, 5hp / 230 volt, 2 stage pump, 5" ram. the top half unbolts so it's easy to move. The cylinder you are standing on looks like it has no way to connect the rod to your press.
S

Good deal we finally got another press picture. The cylinder I'm standing on is just an example of the size of cylinders I found in that yard. I'm waiting for the snow to go off so I can get a good look at the cylinders they have. That one just happened to be sticking out the edge of the of the pile. A lot of them were drifted under. What size bolts are those Mr. Mack?
S