When makers say they they are using “stag” handles, which particular species would they normally be talking about?

Kev I believe it's fairly generic. In other words it could be any of several different species of deer, or even elk. However the good stuff is usually Sambar Stag. It has the least amount of pith of any antlered deer. Thus being nice and solid for handles.

Most of the high end makers and collectors are using sambar stag.

Kev, I have a pretty good source for the Sambar Stag material if you want it.

I rarely use anything other the Sambar stag.

Teaching Moment:
The big difference is how solid the antler material is. All North American animals that grow antlers, do it via "velvet" and they grow from the outside inward. They also have a significant "pith" in the center/core. The larger the species, the larger the antler, and the more pith that exists in the antler. It's nature's way of swaying the size to weight ratio to the animal's behalf.... making the load easier to bear. The one possible exception for North American antler is Caribou. Immature bulls have fair solid antler, but after reaching maturity, their antler becomes more "pithy" at the core. IMO it's this pith that make most North American antler unsatisfactory for knife handles. The more pith, the more you have to "fill" or "seal", and the more the antler will "move" with environment changes, not to mention being far less durable/stable as a knife handle.

Sambar antler still grows via "velvet", but the antlers grow from the INSIDE OUTWARD.... and are supplied via a single larger blood vessel that goes more or less up the center of the antler, and outwards into tiny capillaries that turn solid as the Sambar antler matures. The antler has little to no "pith", and a single hole running the length of the antler/piece. That's how to identify true Sambar stag.

About a decade ago, the tree hugger crowd managed to get an import ban placed on Sambar stag.... however, some who were importers, and met specific criteria were "grandfathered" in. That's when Sambar became super rare, and super expensive.

That also produced, and still does produce a lot of "knockoff" antler. Mainly European Red Deer, and Fallow deer antler, being sold as Sambar. Many don't know the difference, and to this day are being taken/sold antler stated to be Sambar, when it's not.
It's really easy to spot the rip off outfits, when you know what to look for. If you look at the cut end of any antler, and there is pith showing....it IS NOT true Sambar stag, even though it's being advertised as such. If you see only a solid end, with a single hole, more or less in the center, then you're looking a real Sambar.

Since the US ban came into effect, there are even "farms" in India and Europe now, that cross breed Sambar and Red Deer, or Fallow Deer, just to harvest antlers, and get around the US Sambar ban.


If you don't mind using imitation, MaseCraft Supply puts out an outstanding artificial stag.....and most people can't tell it from the real thing. It's called "Stag-A-Like" that is about as inexpensive as it gets. I tested some of it for them way back when they first came up with it.... and I am almost ashamed to say how much I liked it.
Last edited: Mar 3, 2021

I found a picture which illustrates what @EdCaffreyMS was saying earlier. 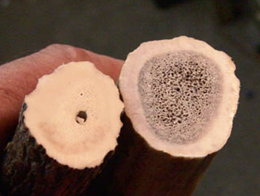 Good to know. I have a pretty much unlimited source for elk, deer, and moose, but I had no idea about the sambar.
I have noticed though on elk, if you can get a brow tine, or a G2 they have very little if any pith, depending on the animal of course. Moose tines aren’t bad either, but it’s tough to convince somebody to hack up a giant moose paddle.
That said, I’m going to have to look into the Sambar.
thanks again

Interesting Sambar story, you can hunt them in Florida....

there's an island off the panhandle of Florida that has free ranging Sambar deer, St. Vincent Island. it's actually a national wildlife refuge and they have quota hunts for them every year. back in the 80s-90s I applied for years to get a quota stamp but never won and eventually gave up.
I've seen pictures of successful hunters though and these things are big, like elk big.

There's a few hitches to getting one if you get a permit though, first it's muzzle loader only, or was when I applied.
second, it's an island so you need a boat. I was told the locale oyster men for a charge would drop you off and come back whenever
to pick you up. it's also mosquito heaven and loaded with rattle snakes...amongst other nasty critters.
the terrain is tough with lots of sand and swampy areas.

On the plus side is if you get one the game wardens will load it in their vehicle and bring it to the beach for you.
it's a young mans game...

from what I understand some rich guy owned the island and had all kinds of game imported. at some point the state acquired it and all that's there now are Sambar, whitetail, wild hogs and the usual suspects found in the Florida woods.

bladegrinder said:
to pick you up. it's also mosquito heaven and loaded with rattle snakes...amongst other nasty critters.
the terrain is tough with lots of sand and swampy areas.
Click to expand...

Hunting in some parts of Florida is a challenge, but I've heard that island will really test your limits.

There are also Sambar stag deer hunts in Texas.
K

I don’t want to get terribly off topic here. But, I heard that the exotic species in Texas took a huge hit with that big winter storm. I’ve heard reports of hundreds of animals dying on just one ranch.
To bring this back full circle, I hope this doesn’t impact the knife handle market to badly.
You must log in or register to reply here.
Share:
Facebook Twitter Reddit Pinterest Tumblr WhatsApp Email Share Link
Top