How many of you guys use a coal forge?

A couple weeks ago I went as a visitor to the local chapter meeting of the Arkansas Blacksmith Organization. There were about a dozen guys there, but only one that forged knives. I tried to feel him out, but he pretty much makes rustic style $50 knives, mostly as trade items. Not really my thing as far as knives go, but it did seem like a good group of guys.

So, my question is how many of you guys use a coal forge? Seems like just about everything I see online are propane/gas forges. If I join the club, they buy coal in bulk so you can get it pretty cheap. Would there be any big disadvantages to using coal? A coal forge seems easy enough to build.
E

I am a "blacksmith" working toward becoming a knife maker. I see no problem using coal to forge with. You have to be more careful not to over heat your blade/ tip but a coal forge can work very well to forge knives. Ed

I started with a coal forge and still use one in most of the ABS classes I take. Being in South Florida coal is very expensive to bring in, that's why I switched in my studio to propane.

I made my coal forge using a cut down brake drum.

Coal and propane forges are two totally different animals. I started out with, and ran coal forges for about my first 6 years. My wife would literally make me strip off my clothes on the back porch, and go straight to the shower when I would come in the house after a forging session. She used to say.... "The only thing that is clean are the white of your eyeballs!"

With coal you spend as much time tending the fire, as you do actually forging, and if you live in a place where ANY neighbors exist, the smoke and smell is going to cause problems with them. All that being said, I personally enjoy working with a coal forge, and prefer it when it comes to doing ornamental work. However, for Bladesmithing, propane is the way to go...... its simply a better all around choice for what we do.

I was spoiled when I first started, because the first coal I purchased was from the Cumberland/Elkhorn company, and I could buy it locally. When we moved to Montana, there simply wasn't any decent forging coal anywhere in the NW region (compared the the Cumberlan/Elkhorn) and at the time, Cumberlan/Elkhorn coal was $200 for a ton....but to get a ton to Montana was $600 in shipping! That's when I got serious about switching to propane. Once I got the first propane forge setup and running, all I can remember thinking was..... Wish I would have done this 5 years ago!

As much as I love the history and tradition of Blacksmithing, and all that goes along with it, for the Bladesmith, there is simply no advantages when it comes to a coal forge over propane, and in many ways its a step backwards. Having said that, I am certainly not against coal forges, and whenever I get a chance to step up to one, I will. Its just the fact that propane is so much better all the way around for Bladesmithing.

Thanks for the opinions guys. I assumed propane probably was better, but coal seems easier to setup initially. I guess what is attractive to me is the fact I can build a coal forge with stuff I already have around the shop. At the club meeting I visited, the guy that was hosting did not have his forge vented well in my opinion. I felt like I was breathing smoke the whole time, so that was a very negative feeling. Supposedly, the club is buying good coal that doesn't smoke as much or something like that. Can't remember for sure, but seems like they said they get it in 50 pound bags for $7 or $8 each. Might be off on that, I took in a lot of info on the visit. But in comparison, around here propane is pretty expensive, at least it seems that way to me.

I'm thinking about trying it simply due to the "free" aspect of building a little forge. And, as Ed pointed out, I have no neighbors, I live in the boonies. I've seen the brake drum forges and I have a variety in my scrap pile, all the way from a little car to a semi-truck drum. But, I've got a couple of big plow discs that might be better. How deep should the coal be at the center? I'd say the discs are about 4" deep at the center and are almost 24" wide. Might drop one of the discs into a table for more coal storage.

Maybe a "free" coal forge would be a good place to get started and then progress to a propane forge later.
D

One thing in this discussion that was missed. No one actually forges with coal. You have to burn it out to coke first and that's the smokey, smelly part. When designing your coal forge you will need to have a area around the main fire pot were you burn green coal to coke before raking it into the center.

24" wide is Way to much. You will burn more coal than you need to and it will be coal that you will not get use out of it. My fire pot is about 8" wide and 4" deep. It could be a little wider but it is what I found for free. It is a deep dish brake rotor form the local shop. I set mine in a table so I have a place to set my tools and have extra coal to pull into the fire. Clay the sides a little to protect it from the heat and help it last longer. Just make a thick dough from stay dry and form it around the sides with my hands. You will need an air source that you can regulate. If you can't regulate your air you will again burn a lot of coal. Coal might not be the best for blades but it does work, I know a smith that makes damascus in his coal forge and does well. Ed

Ed, I guess I was thinking the 24" wide plow disc tapers down to the middle and most of the area would be coal waiting to be pulled in, with the heat right in the deeper middle. Would it just be too open like that and let the fire spread out too wide?

At the blacksmith club meeting, but they had 3 forges going that were made out of cut down 55 gallon barrels. In the pic below you can see one of them on the right side. They looked to be made with only a 2" steel pipe running through with holes drilled in it for air supply. They had hair driers on foot switches to control the air. Somebody said the barrels had sand or dirt in the bottoms to take up space, but they didn't appear to have a "firepot" that I could see.

That's why I was thinking the disc would work I guess, seemed like it would be an improvement over the barrel. But, heck, I have no idea. 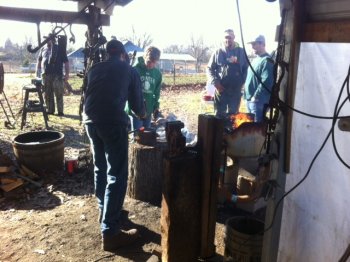 I have and use coal forges. I do more general blacksmithing than bladesmithing but do forge knives. I started with coal for many of the reasons you mentioned, I am a member of BOA by the way, just in the other corner of the state. At some point I plan to add a gas forge because propane does have some benefits over coal, I just haven't justified the cost as of yet, there are other toys I want first : ) . If I can help, just ask.
E

I am assuming that they used dirt to make a fire pot, but that is just a guess. I just went to the shop where I get my car worked on and they gave me the rotor that I use. With scrap prices what they are now I am sure you could pick up something free or very cheep. Talk to the guys at the club, they have something worked out and could stand beside you as you work on it. Ed
K

We use our coal forge more but its more for general blacksmithing which is most of what we do..For general blacksmithing I like it many more times than propane because the fire is shapeable and your able to concentrate it to small areas were you need it. Not to mention welding in. Mild steel and wrought require much higher temps to weld than blade steels..Like making chain, its impractical to try and make chain in a gasser..Almost all of our hawks and axes are welded in the coal forge too..then living here in the heart of coal country I can buy top quality coal 10 minutes from the house for next to nothing..We can run the coal forge all day for less than a dollar!
Now that said if I were only doing blades Id probably prefer a gasser. Our gasser is handy especially for large and long pieces..Also handy for multiple pieces in the forge because you don't have to worry about it burning them up..The downside to propane for us is the cost...While not expensive at all in reality, compared to our dirt cheap high quality coal it is...
You must log in or register to reply here.
Share:
Facebook Twitter Reddit Pinterest Tumblr WhatsApp Email Link
Top